Backhand Tennis Tips | Elevate your game with these tips today
0

The backhand stroke is what players practice the least for some reason. With some practice, the backhand can become quite a weapon in your ground-stroke game. You can use a two-handed or one-handed tennis backhand, but what’s most important is the stroke itself.

We’ll discuss some critical things about the technique that every tennis player can adapt and practice.

Since it’s what you practice the least, the tennis backhand it’s most often much weaker than the forehand. Luckily, one can improve its backhand with repetition and practice.

A good backhand allows you to improve your accuracy, power, and topspin. Most tennis players will tell you to rely on your forehand but having a dependable tennis backhand is just as important in under pressure situations. Being one of the main shots in tennis, the backhand is used in approach shots as well as in baseline rallies.

This is a very clean technique that’s compact and minimal. Marat allows the racket to return using the body turn and coil. his racket is doing very little with minimal swinging on the backhand. Marat focuses on coiling, so the energy is released on contact. This makes the technique somewhat almost flawless when done correctly. 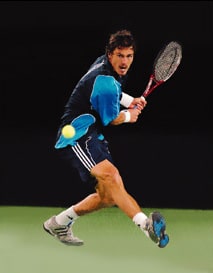 Used by many tennis players around the world, professionals, and beginners, the two-handed backhand is a winning weapon in many matches.

If your dominant hand is right, the most common grip for you is the Eastern forehand grip. For your left hand, the Continental grip would be the best.

With this technique, you can use both loop backswing or a compact backswing. Being in the initial split step position, you have to bring the racket back, turn sideways and get ready to step forward with your left foot.

Bringing the racket to about 1 foot below the ball is critical. The entire movement makes the racket face to brush off the ball creating topspin. It's your body weight that should transfer to your front leg at this point.

Not as popular as the two-handed one, this technique is still used by some professional players such as Roger Federer. The grip you use in this case depends on what you want to achieve. For example, the eastern backhand would be the best for topspin on the one-handed technique.

In this case, your body is faced at the net with the feet turned in the same direction. Hold your racket with both hands.

Your feet should face the net, while you step forward with your right foot if you’re right-handed. The key is to meet the ball early if you want to execute the backhand properly. The movement of your foot is what allows you to generate pace, while also allowing you to move upward and forward with your legs.