How to Regrip a Tennis Racquet | See the Full Tutorial
0

​Tennis rackets are an essential part of your equipment since you need them to play. But owning a good racket isn’t enough by itself. Taking good care of the racket, and all of its parts is equally important.

Most people think that strings are the most crucial part of a tennis racket, and most of the time, they're right. But the grip also plays a vital role, as it has a massive effect on how you hold the racket and strike the ball. A neglected, or worn-out grip can have a substantial negative impact on your game, the racket, and possibly even your hands.

A comfortable grip enables you to hold the racket comfortably and strike the ball correctly, providing more control. If you can't hold the racket correctly, how well do you expect to play? If you ever watched a professional tennis match, you might have noticed that players regrip their rackets in between sets. They do it to ensure that they’re always playing at their best.

Not only does it improve your game, but it also extends the lifespan of your racket. It is the only way, along with the restringing, to keep your racket in good shape, without having to change it every single year.

Before you learn how to regrip your tennis racket, it’s essential to learn about replacement grips and overgrips, as well as their advantages and detriments.

A replacement grip is just that, a grip meant to replace the existing grip of your racket. Replacing a grip requires a small degree of skill, and it must be done correctly to avoid bumps, unevenness, and a feeling of additional weight.

Also, grips have staples at the bottom, holding them in place. These are great, as they do an excellent job of keeping a grip in place. However, they make the task of replacing a grip hard. Regripping without staples can be done but can cause a grip to fall apart, if done incorrectly. Make sure you do a good job when replacing the grip, and if you can ask someone to show you how it's correctly done. 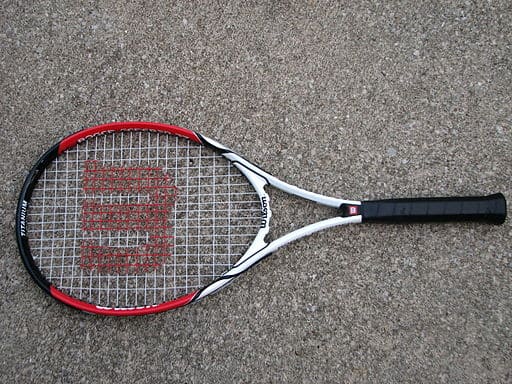 If you don’t wish to stress out with staples or sticky tapes, consider getting an overgrip, since they're easier to replace. Instead of sticky tape, overgrips have a small amount of glue that keeps it attached to the butt of the racket.

Replacing an overgrip is easy, you just remove any previous overgrip, by removing the sticker tape, and pull the overgrip off.

How to Regrip a Tennis Racket:

Regripping a tennis racket isn’t hard, and it’s a good idea to learn how to do it yourself. After a few tries, you will determine what’s the right size for you, and you’ll be able to customize it further.

Before you start, you'll need needle-nose pliers for removing existing staples, and some scissors to trim the excess grip and finishing tape. A staple gun is an optional tool, and it's used for securing a grip to a handle when starting.

First, you’ll need to buy grips, which usually come in a pack of three, along with the grip tape. Once you've bought the appropriate grips, you need to remove the old one. Unwrap it, and use the needle-nose pliers to remove old staples at the bottom. Make sure that the handle is free of any old grip material or adhesive, and as clean as possible.

Take your new grip and unroll it. Be careful with the grip tape, and put it somewhere safe, you’re going to be needing it later. For now, just remove the clear plastic protecting the grip. Once you’ve peeled it off, pay attention to the ends of the grip. One of them will have a sticky piece, which indicates the side you start with. You can staple that end to the but of the handle if you wish.

Start wrapping the grip around the handle, overlapping the edges about 1/16 of an inch each time. This overlap ensures that the grip won’t unwind or unwrap. By controlling the width of the overlap, you control the thickness of the grip.

Keep wrapping it, nice and tight, all the way to the top. Once you’ve reached the end of the handle, cut off the excess grip and secure it with the finishing tape. And there you have it, and nicely regripped racket.

Regripping a tennis racket isn’t hard, and with a little practice, you’ll be able to do it correctly. However, if you don’t want to stress over it, there are tennis professionals that will regrip the racket for you.