​A kick serve is the best compliment to a fast, flat serve. If you have a second serve that’s consistent and prevents your opponents from being on the offensive, you’re doing great.

This is where you want a good kick serve. It bounces high, confuses your opponents by taking the ball out of the strike zone and allows you to finish with a volley at the net. It messes up their positioning and timing forcing them to be defensive and conservative on their return.

It opens up other options; the fact that you can hit a good kick serve because it adds difficulty and unpredictability to your game.

The last thing you want is your opponent to be comfortable, and that’s precisely what will happen if you serve with only one type of serve. By mixing things up with a kick serve you keep your opponent off-balance.

A reliable kick serve allows for more chances on your first serve because it makes it much more dangerous. However, the serve is a little tricky and not as easy learn. With practice and technique, everyone can master this. 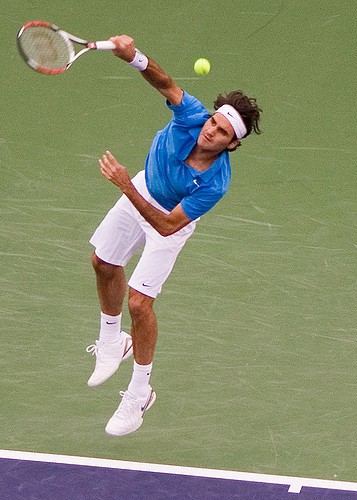 Throw the ball behind your head:

​The kick serve is different than a flat serve because you want to hit the ball when it’s in motion behind your body. If your dominant hand is right, throw the ball to be to your left. This way, when the racket makes contact, it will create left to right spin. Still, experiment with this until you see where the throw works best in your case. Generally, make contact at 11 o’clock, or 12 o’clock that’s right above your head.

​To prevent injury, it’s important you practice the technique the right way. This is especially the case with the kick serve because the toss is behind your head. Usually, when you try to do a kick serve, you have to arch backward quite a lot. The strain on the back happens when you do that and then suddenly twist forward to hit the ball. It hurts your serve, and it hurts your body.

To avoid this, you should bend your knees and bring your hips forward when the toss goes up. This balances your weight and distributes it evenly. It also forces you to reach instead of lean with your back. The ball is behind you, so you need to bring all your weight between your legs. This gives you much more control and power.


Keep your head and your hitting elbow up:

It’s important you don’t crouch down when you swing. This is what many people do, and it’s wrong. It’s a problem because of the pace and spin this puts on your ball.

Extend and reach up as this allows you to use the full force and power of your serve. The key is to straighten your back. Once your racket head is down, try and have your elbow at the shoulder level.

By keeping your tossing arm and your head up with legs strengthened, you’re in the best position allowing your racket to shoot through the hitting zone.