If you want to improve your net game, the first thing you should do is strengthen your volley technique. You can do this with these tennis volley tips and tricks that will help you to improve your backhand and forehand volley.

If you don’t know what a tennis volley is, it’s the stroke before the ball bounces on the ground. Typically, you shoot volleys when you’re near the net or at the net, though you can even do it from near the baseline. Volleying far from the net is rarely done.

A tennis volley is an offensive shot since it’s used to surprise the opponent by limiting its reaction time. It’s hard for your opponent to return the ball and if he does, it’s usually a weak one. On clay and grass courts, a volley minimizes the bad bounce effect.

However, you will come across people using the Eastern forehand grip for a forehand volley. The disadvantage, in this case, is that it’s not as easy to hit a backhand volley in your next shot. You’d have to change your grip to a continental grip to do so. This is confusing for beginners, and it’s also time-consuming. 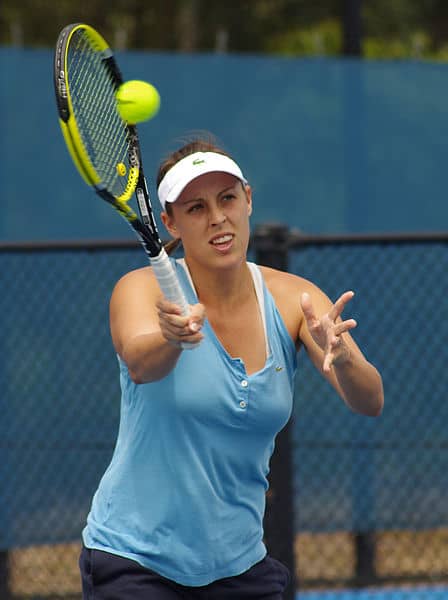 When it comes to preparation, limit the opponent’s chances and react to the ball quickly. Try to limit its shot options to 2 or 3.

​A quick response time and anticipation of the opponent’s shot are vital for a tennis volley. This skill allows you the big advantage at the net. Also, it’s more important in doubles matches since there is much more volley in doubles tennis matches.

It’s important you practice the footwork preparation for a proper tennis volley execution. Practice an appropriate split step and balance. The best-case scenario would be to execute the split step the very moment your opponent contacts the ball.

Most club players have late reaction time. For this reason, their racket face is facing fully upwards. The position of your racket head is crucial for a good volley execution. The face must be slightly open and facing upwards when it comes in contact with the ball. You can use this exact position of your racket face in a backhand volley and a forehand volley. It’s no surprise that this tennis racket position is commonly used amongst professional tennis players.

The serve and volley approach:

One great technique that many tennis players use to make their game more aggressive is the serve and volley approach. The way this is done is by having a strong first serve or a strong second serve such as the kick serve. You would serve as you normally do, but after your opponent returns the ball you rush the net and will finish it with a volley if executed properly. Thanks for reading, we hope you enjoyed our list of  Tennis Volley Tips